Free with the Hornnby Magazine in September 2022 was a Scalescenes corner shop which you have to construct yourself. Here is my finished shop. 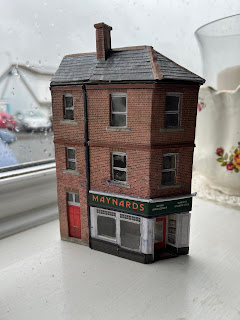 Running a couple of trains today. Accidentally programmed all trains to same DCC address earlier, but have managed to put them all back as they were. Must remember not to do that again. 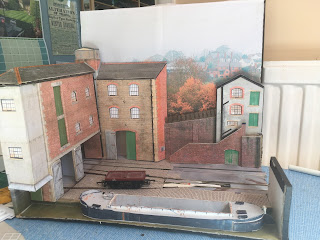 Well we have three buildings in the yard now but the exit on the right needs to be completed, this is done with two bridges, one over the canal and one over the railway. Added at a slight angle, there is a bit of pavement on top. 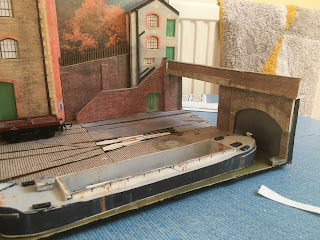 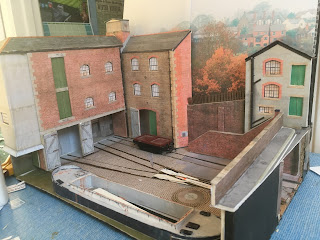 And we are almost there, this was quite a lot of work from a downloaded plan costing £10 from Scalescenes.com. Just add a suitable loco and truck, a few signs on the buildings and a street name. The final touches can include adding a bit if greenery around the fence and the base of the bridge, but I had nothing suitable for by the fence. The fence isn't part of the kit it was purchased separately for another project, but I had enough to use some here. When the back wall of the box file is vertical you can see the backscene that comes with the kit. 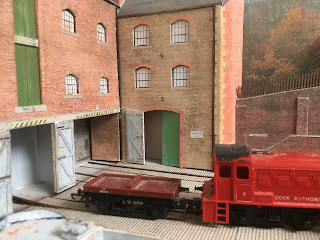 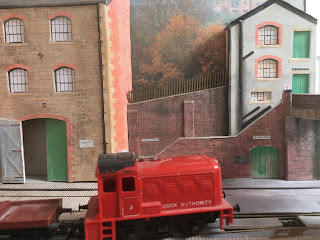 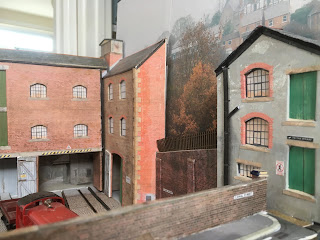 Thats it for now. Not everything worked totally as well as I had hoped, the key is the quality and thickness of the card you use. If I could find better card I could rebuild it, since once you have downloaded the kit you can use it as often as you like. And just as I finish, what should arrive in the post but a bag of ballast. So it's back to the main model, and time to run a few trains before we add more ballast. That's all for now though.
Posted by oldwulf at 21:47 No comments:

Having constructed the base, the barge and the first building it was time to move on the building 2, this had a few extra bits such as Steps and extra walls to deal with. Here is Building B being constructed and in place in the box. The side of Building B slots into Building A which fills the back wall of the box. A bit of Velcro on the back wall of these building will hold the backscene in place when the box lid is raised. The infill between the tracks isn't yet in place but will be added later. 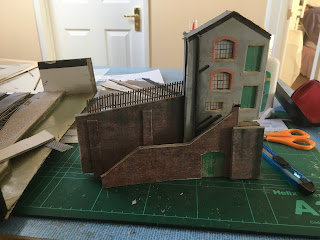 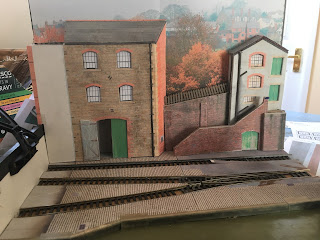 Having finished the first two building it is time to start building C which will fit over the tracks at the left hand side of the box. This has an extra part on the side which is a hoist that hangs over the canal, so material can be hoisted straight from a barge into the building. 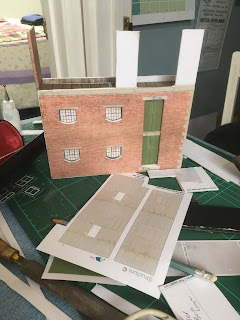 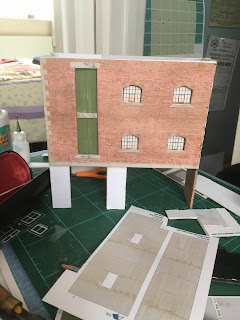 There are green doors which can be fitted to the lower part of the buildin, but if you want the model to fit in the box then these doors have to be fitted in the open position with only the backs visible. 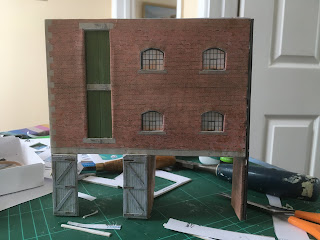 Next comes the Hoist that fits on the front of this building. Here it is being constructed, and then in place in the box. Remember if you click on the images you can see a larger version 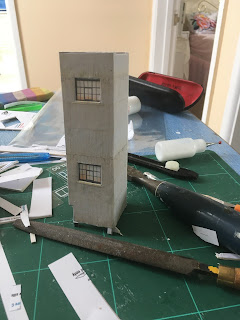 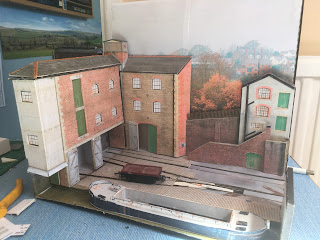 With a spare voucher I had for Christmas I bought a Scalescenes 'Canal Scene in a Box File' kit for £10. This is a standalone diorama, or can be fitted into the corner of a layout. The track options can be created to match up to an existing siding on your layout. Once I had downloaded it I realised I had quite a big job to do. With 34 pages of Kit parts, to mount on Card, and 22 Pages of instructions (236 Steps in all), it was the equivalent of a 1000 piece jigsaw but in 3D. There is the base, with your railway tracks embedded in the surface, then a canal barge, then three buildings and a bridge to construct. I started with the base and the barge. 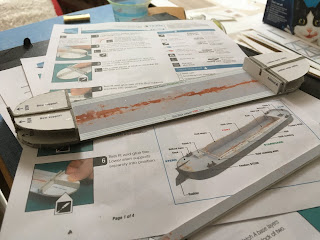 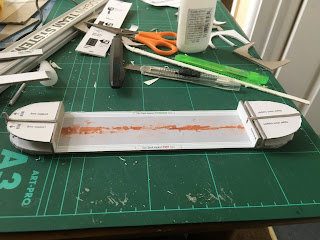 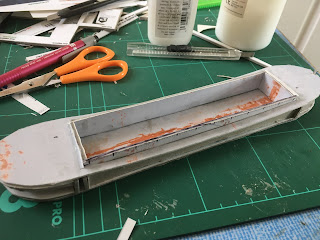 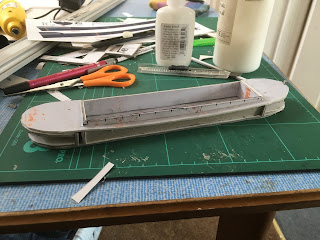 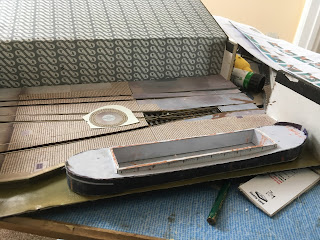 Having finished the base and the barge, the buildings are constructed in order, Building A, B and C. The key here is to get good quality card that won't bend. Unfortunately some of the card I was using wasn't that good, so the finish isn't as good as I was hoping for. I could rebuild them of couse, because once you have downloaded the kit you can use it over and over again, but I first have to source a better quality card. They also recommend three different thicknesses, and the parts fit together best if you stick strictly to the thickness of card suggested in the instructions.

Anyway, here's building A in progress. 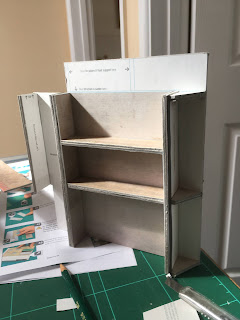 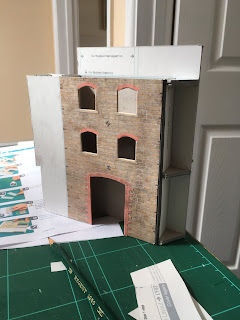 The picture below shows where the building will fit in the box file. A backscne will be added on the lid, and they send two versions, an A3 version for if you have an A3 printer or two A4 pieces if you haven't. You will see it later. The back wall of building B is also visible in this picture. 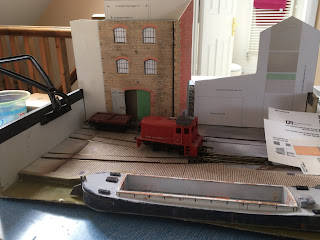 That's it for part one, buildings B anc C will follow shortly.

The latest version of the model

A friend was asking what the latest version of model looks like from above, so I took a few pictures. These show what an unfinished state it is in, and a rather untidy room but you can see the double track oval round the layout, with sidings at rear leading to goods shed and brewery.

There are tunnels at both ends with town and fields over the track, and a set of storage sidings off one end with a triangular track(reverse loop) arrangement, so trains can leave the main layout and can then reverse back onto layout facing the other way. This removes the need for a turntable to turn stock around.

The main station has two through roads and a bay platform with two further platforms with a run round section for the engine that brings the train into these platforms. 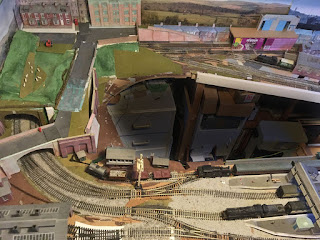 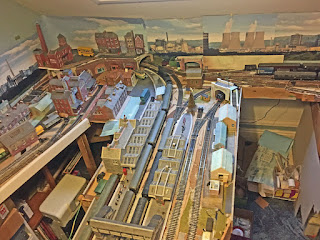 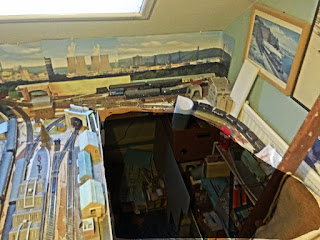 An accident was caused just outside North tunnel today when a local train derailed and a coach fell into the path of a passing express. Railway investigators are trying to establish the cause. 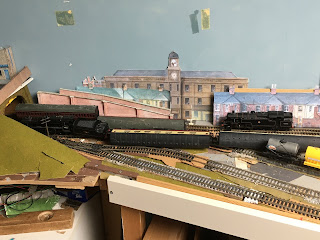 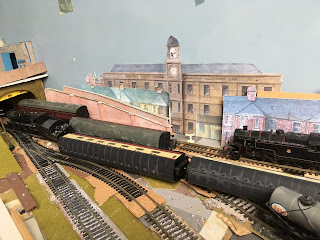 At the moment the cause is believed to be an unknown obstruction in West Tunnel.