Two more houses now completed. We now have a terrace of four. 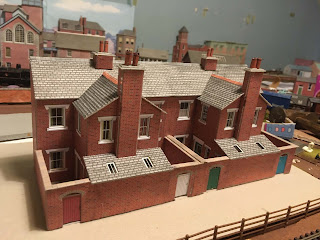 I've just got to decide where they go now.

I have decided I ought to build up some kits which i have as I need to plan where on the layout they will fit. So far this month I have built a factory gate, 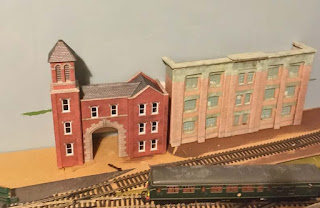 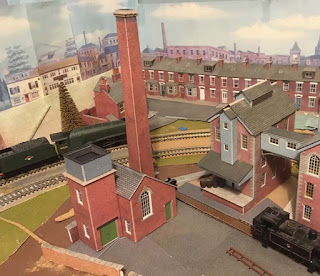 and two of a row of four terraced house backs. (Chimney pots to be added) 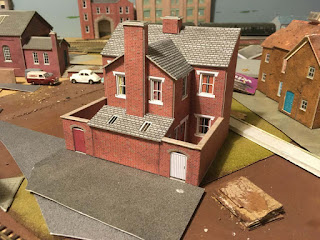 I still don't have much time for the model at this time of year but I have marked out the brewery yard, and the access to it via a level crossing that crosses the reversing loop. It may have to be a crossing without gates as i cannot find Gates to fit at the moment. That's it for now 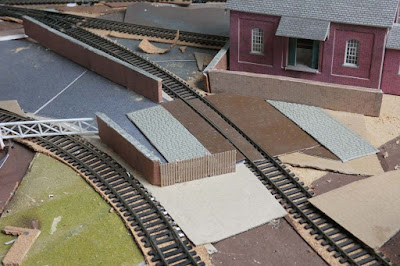 Click here to watch Track is a a bit wobbly at the moment.
Posted by oldwulf at 22:27 No comments:

I've been busy doing other things lately so the layout has not had much updating. I did paint the baseboard with some discount brown paint that I found in Hobbycraft. The holes in the layout that give me access to the rear will be filled in with an easily removable section once work at the back is complete, as I am hoping not to have to access the back too often once it is finished. 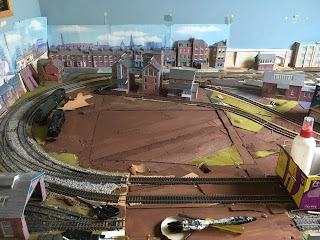 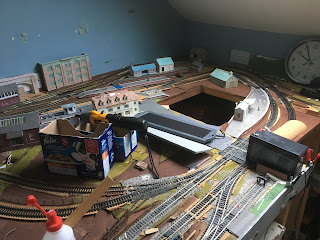 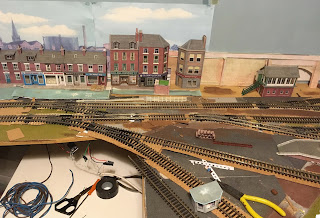 Well Hattons took a while (item was in stock but in the wrong warehouse, apparently) but they eventually dispatched the loco and point which I had ordered, so I fitted a motor to the point, drilled yet another hole in the baseboard and fitted it.

Next thing to do was to electrify all the points at the rear of the layout so I can operate them from the front using a spare power supply. (I use a spare power supply because when I used the Hornby Select, it sometimes tripped when operating points, and when it trips it defaults back to loco address 3 three, whatever number it was on before it tripped).

I try not to have a loco with address three as it starts on its own if I adjust the controller before selecting another number after a trip.

Having got the points electified and tested, I did a test run with a DCC loco and it runs round the circuit and through the reverse loop without any problem, thanks to the reverse loop module which I had for Christmas. I can now start to fit some of the track more permanently but have a few areas where a slight re-alignment of track will be needed before its fixed.

Remember you can click on the picture for a bigger version)