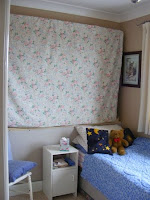 The layout will now fold up and down, and when it is up can be hidden from view as shown, this hides all the wires and the underside of the board. You would hardly know it was there now.

I have built part of a station, and it has to go in the middle of the layout so there will be a terminal station in the middle. There may yet be one on the main loop as well, and I have to find a home for a goods shed, an engine shed and some terraced houses once they are built. Pictures will follow.
Posted by oldwulf at 21:49 No comments:

Well the board is fixed to the wall and can be folded up and down. The supports have been hidden behind plasterboard which just needs painting (one day).

The boards will fold up and down independantly and I have relaid the track approaching the join at the back so it meets up accurately. An electrical feed has been made from the left to the right board, so all the track is live, it just remains to do some live testing with a train before I continue to finish it off. 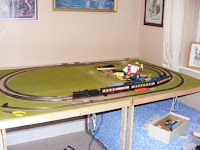 At the moment I have two circuits and a passing loop, I now need some sidings in the middle but havent yet decided how to lay them out. I have decided to build some model kits and see how they look on the board, this may decide the layout for the middle of the model. 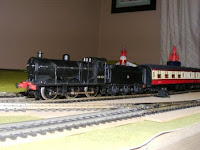 I even got as far as running two trains at once. The track in the middle was just tempoary to run trucks into but may yet be incorporated in the plan. 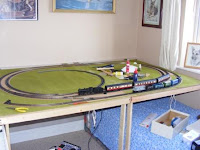 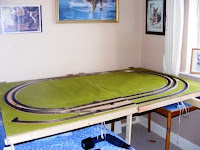 After extensive negotiations, I was told I could put the layout in Bedroom 4, providing that it could be put away for guests to use the room, therefore a fold up layout has been decided on. Because I cannot reach the back when it has been folded down, I am keeping it in two parts for the time being, but hopefully when it is complete I will be able to lift and drop the two parts together to keep the track aligned. 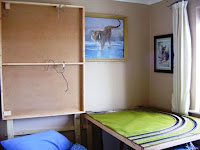 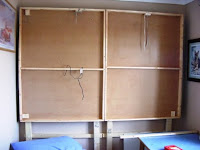 Layout has been moved to the Conservatory for more construction, one part of the board at a time. 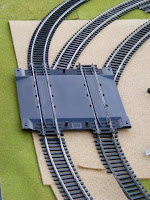 I am using an old level crossing to get the track centres the right distance apart.


Planning as I go I decided to put all my old track out. 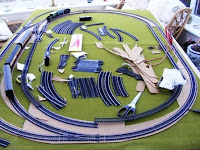 And to get some rolling stock to test how it runs on the track. 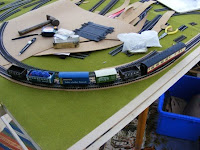 The Double O layout - The beginning

Firstly I received a digital starter set for my Birthday, then my son donated his two old sets, as photographed in previous blog. I realised I didn't have much track, so I started looking on Ebay to see if I could get any reasonably priced bits. I found two curved points and some curved track which I got from there.

Next step was to work out how to use the curved points to form a crossover point from third radius to second radius. I want a double track oval as the basic layout, but did not like the track plan that came with the starter set so I decided to create my own plan.

I decided to use a 6x4 baseboard, but to construct it as two 4 x 3 to make it more manageable. Here is an early example of how the points may fit. I've had to buy some short track lengths to go with the points. 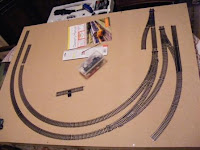 I have some old track and points which I am using in the planning stage, although they may be too dirty to use in the layout, unless they clean up. I could use them for effect in unused corners of the layout.
Posted by oldwulf at 21:27 No comments:

Building a model railway - why?

When I was a lad I had a small model railway which had to be assembled and dis-assembled , and was rather envious of two of my friends. One had a railway layout in his father’s toy shop , which he could play with when the shop was closed and one had a Hornby Dublo layout in his loft that was permanently available. I think mine was sold off to be replaced by a 6 ft. snooker table when I was a teenager.

When I grew up and had children, I had to buy them a railway, and so did my mother and we did get it out in the living room a few times. 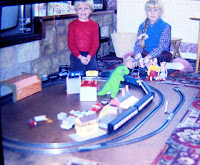 I had plans to put it in the spare bedroom of our 4 bedroomed house, but before I had a chance to do so baby three came along and took that bedroom.

My enthusiasm never completely waned and was rekindled last year with two visits, one to Pecorama at Beer where there are several layouts on show and one to the NEC for the Warley Annual Railway Modellers exhibition, with lots of models on display. 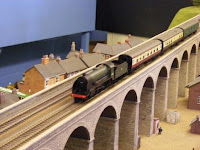 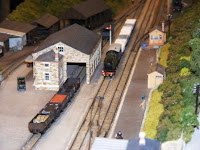 Once these had been seen I decided to start a model for myself and put a train set on my Birthday list, much to the surprise of the family.

What happens next will be the next blog.
Posted by oldwulf at 00:05 No comments: